In short, the Town has no regulatory authority over internet service providers in Barrington.  That said, Town leadership and the Barrington Technology Committee are actively advocating on residents’ behalf in a few ways as it relates to improved internet services.   Members of the Technology Committee have met with leadership from Atlantic Broadband to discuss general concerns from residents and the steps they are taking to improve customer service and system performance.  Maintaining the lines of communication is important so we can continue to advocate for residents.

Atlantic Broadband does not have a monopoly in Barrington.  This common misconception comes from the fact that Atlantic Broadband is in a non-exclusive Cable TV Franchise Agreement with the Town of Barrington.  Federal (47 U.S.C. § 521, et seq., and the rules of the FCC at 47 C.F.R. Part 76) and State (RSA 53-C) law gives the Town jurisdiction (franchising authority) over cable TV and cable TV only; not internet or phone services (see FCC 8/2/19 Order).  One of the primary purposes of this franchising authority is to ensure that all of Barrington is served by the communication infrastructure.  This is important because if it were strictly market driven, many rural parts of Town would likely not be served (more on this regarding internet-only services below).  The service area requirement is covered in Article 3 of the Franchise Agreement.  Section 2.2 makes it clear that this is a non-exclusive agreement and if another company wanted to meet the same terms, they would be granted a Franchise Agreement also.  While discussing the Franchise Agreement, it is important to mention that Barrington does not collect a franchise fee as allowed in the agreement; although many communities exercise this 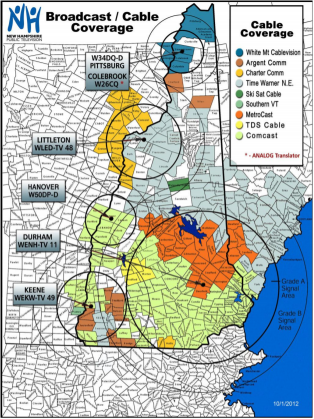 option as an additional revenue source, the fee is simply passed on to the consumer.

It may surprise you to learn that most of NH is served exclusively by one cable company without local competition.  The map on the right is a few years old, but illustrates the lack of competition statewide.  The investment required to run redundant cable infrastructure throughout an entire community (as required by most franchise agreements) is not generally determined to be worthwhile since the new provider would only be competing for half of the business.

In Barrington, Atlantic Broadband (formerly Metrocast) owns the cable infrastructure; they pay rent to Eversource/Consolidated Communications who own the poles.  The Town assesses the utility poles in Town (on Town and private property) and charges Eversource and Consolidated Communications a property tax.  Additionally, the Town assesses users of the utility right of way, including Atlantic Broadband.  The Town collects nearly $500,000 annually in property tax revenues from utilities.  Regardless of who installed the cable infrastructure utilized by Atlantic Broadband, they now own it.

Most residents care much less about cable TV than they do about internet services.  It is important to first explain cable TV and franchising because the Town’s jurisdiction over cable TV providers does not extend to internet service providers.  While many residents are only offered cable internet services through Atlantic Broadband, there are areas of Town with competing internet service providers (Consolidated Communications, FirstLight, etc.).  The difference is, they are not required to serve every property in Town, thus they make business decisions to determine where to install their infrastructure.  The Town absolutely encourages additional providers to serve our residents, but we have no jurisdiction to compel them to do so.

These problems are not unique to Barrington or even New Hampshire.  One option which is gaining traction in New Hampshire is Municipal Broadband.  The primary initiative of Municipal Broadband is increased speed/connectivity, but this model can also result in more municipal involvement or control in the internet services contracts.  The Barrington Technology Committee has recently begun evaluating the viability of Municipal Broadband in Barrington.  We believe Federal and State funds will become increasingly available to support these initiatives.  There is activity at the State level which is helping to address the speed/connectivity concerns of residents across the State.  The Governor recently allocated $25 million of COVID-19 aid to municipal broadband projects across the State.  Our representation at the State level could certainly assist in securing funding for such an initiative.

While we recognize that this information does not solve the concerns of residents reagarding the lack of cable/internet provider competition, hopefully it helps residents understand the environmental factors at play.